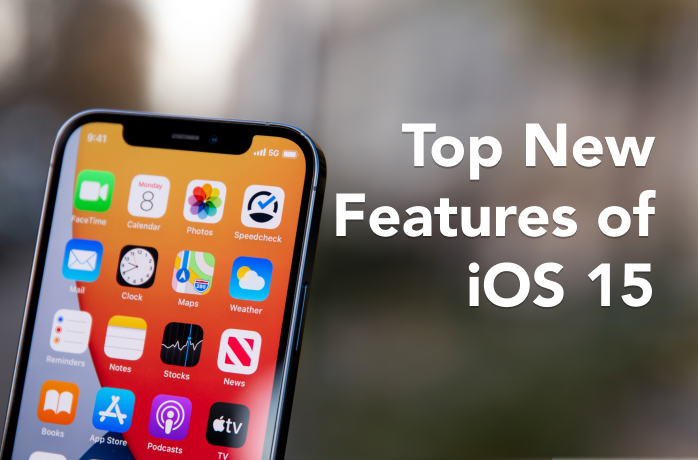 Since the beginning of the iPhones, Apple has been trying to make the software as user-friendly as possible while adding new features. Apple tries to avoid complicating its products and focuses more on simplicity. An example of that is the new iPhone launch, you might have noticed that Apple never talks about numbers like battery capacity, speed benchmarks, etc. Instead, it keeps it simple by saying 20% more battery life or 50% faster processor and this is the reason why Apple gave a feature like customizable widget screens just last year because Apple thinks that adding this customizations will confuse the user while they want to perform certain tasks. This year Apple has added some cool features that will boost its user experience.

There are a lot of new features to talk about but since this is just a blog we are gonna cover the ones that will affect the user experience of Apple customers the most. So without any further delay here are the top 5 new features of iOS 15!

Safari: The best UI update has been done to the Safari Browser. The address bar has been shifted at the bottom and this will make safari very user-friendly especially for the bigger models like iPhone 13 pro max. The top bar is not a problem in smaller models like the iPhone 13 mini but for the models like iPhone 13, 13 pro, and 13 pro max it gets difficult to reach it and with the sharper edges it gets tougher. The bar at the bottom of the phone is more accessible but it also means that the top-notch will hinder your view, however you might get used to it.

Shared with you: With iOS 15, Messages is getting better integration with other Apple apps like News, Photos, and Music. Starting this fall, content shared via Messages will show up in those apps. This will be done through a new “Shared with You” feature that will track content shared within message threads across relevant apps like photos, articles, and music.

For Example, If someone sends multiple images to you in multiple threads then you will be able to see those pictures in photos in a single thread and iOS will also determine which photos are most relevant to you.

Focus: You might be aware of the DND mode that Apple offers, this time they have taken it a notch higher and made it customizable with the feature called Focus. You can set up different activities that you do in a day for example Driving, Running, Work, etc., and decide what kind of notifications you want while you are doing those activities and also set timing when you want those modes to turn on automatically.

For example, if I start working at 9 AM and take a break at noon and I only want to receive messages then at 9 AM Focus mode will automatically restrict calls and other notifications except messages. Apple is trying to make iOS better by offering such customizations that will enhance the user experience of its fans.

Portrait Mode: Portrait mode will help you sound and look better in the video calls and the best part is that it will work with other video calling apps like zoom, google meet and whatsapp call as well, all you need to do is go to the control center and long-press video effects and select portrait. You can also sound better by selecting the mic mode button and selecting sound isolation. This time Apple is not just integrating features into its ecosystem but also trying to facilitate the same features for other apps as well.

This time Apple has made significant UI changes that will enhance the user experience of its customers. It looks like Apple tried hard to deliver the best software experience to its customers and did their user research well while developing iOS 15. These new features have got the apple fans excited about the new iOS 15 and it's now downloadable. So go and upgrade to the new iOS 15 now but before that don’t forget to check out our blog on Usability testing right here